Her Doctors Were Blown Away 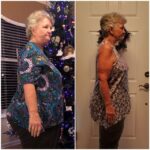 Dieter Cyndi’s journey to a new, healthier life started with a scary event: she was hospitalized from blood pressure complications that were brought on by her weight. Cyndi weighed 335 lbs and decided she needed to make some changes. She tried Nutrisystem first because pre-packaged foods worked well for her 12 hour work day. In the five months she was on Nutrisystem, she lost 18 lbs but found herself socially isolated. It was difficult to entertain company or eat out.

“On Nutrisystem, If I had company, I was kind of restricted to what I was eating but I had to fix this whole other meal for everybody else. And if you wanted to go out, it was a real challenge. It kinda isolated me socially.”

After hearing about Plan Z on the radio, Cyndi decided to give it a try because it sounded a lot more exciting than another month of Nutrisystem. She lost 12.5lbs in the first week!

“I found that the Z diet was very easy. I never felt hungry. It was easy to follow, it tasted good and I was losing weight.”

Cyndi saw other numbers changing too.  After a recent doctor’s visit, she noticed huge improvements in her lab results:

Her doctors were blown away. Listen to her experience below after losing 75 pounds on Plan Z:

“The most important thing I learned: that fact that everything I knew is bogus, all my concepts of dieting and what’s good to eat and what’s not good to eat is just blown out of the water. It’s a whole new re-learning process. It’s working and it’s easy to do.  I don’t feel deprived at all.”

Thank you for sharing your story, Cyndi.