No Longer the Big Guy in the Room 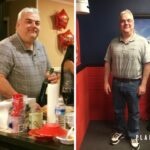 Dave’s interview took place after he lost 40 pounds. He kept losing and has now lost over 70 pounds.

“So, when that first digit on your weight changes to a 3##, your motivation changes.

At least it did with me.

I didn’t get depressed, I got ANGRY. Why was I so fat?!

I heard about the Plan Z Diet and wanted to try it. Little did I know that it wasn’t that I was eating too much, I was eating the wrong stuff.

So with some determination and a little bit of sacrifice (that was made a lot easier with the ZR50 crave control spray), I lost 70+ pounds!

I have also stopped most of my medications, still working on that last pill. My knees don’t ache when I get out of bed anymore.

I was so successful, that both my sisters also started the plan.

I feel so much better and don’t feel like the biggest guy in the room anymore.”